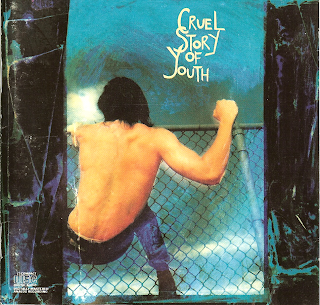 Cruel Story of Youth is one of those bands that got signed and faded off into some obscure land where everything is covered in echo.
That's what you will hear when you listen to this band. This album was definitely recorded using plethora of effect. And not just distortion and some reverb, this is over-production. Plain and simple. A different producer could have taken the creativity displayed in this band and taken them much further. That's the truth, because even with the bad production this is a great album. And that's saying something.

The first two songs from the self-titled (I don't know of any other releases, but they could be out there) are both poppy, and catchy. What you really need to look out for in these songs is the guitar work, particularly the solo in "Love is a Vapor", which lays the groundwork for the phenomenal solo-work on this album. The third song (which could have possibly been a better open song than "You're what you want to be"), called "Out of Love", shows some of the best you will find on this album. The lyrics are emotional and poetic, and guitar and drum solo ties the song to an intense mid-point. "I Don't Know Anymore" is a song about a changed relationship. Here, the lyrics continue to shine and stick with you after the song is over, and the guitar work sprinkles the song with beautiful fills and riffs. The next song of interest would be "I'd Pay The Price". Slow ballad-rock comes in waves throughout the slow, melancholy verses and somewhat upbeat chorus. "The Strangest Word" is a fantastic song that marks the end of the "middle of the album". Cruel Story of Youth really pick up the tempo and bring the best elements of every song before it in this song. This is a must listen, even if you don't care about the rest of the album or this genre of music (so please, shift your attention to the bottom this post). "Violet" continues in this vein, distorted guitar gives the song punch while John Are wails the chorus.

I couldn't find much about this band. A Google search yielded the information that their bassist worked for Rolling Stone, so if you wanted to get in contact maybe start there. Another odd thing came from AllMusic; apparently "You're What You Want To Be" peaked at 29 on the Mainstream Rock charts in 1989. Sadly, not even this was enough to keep Cruel Story Of Youth in the public's mind.

I WILL REMOVE ANY POST AT THE REQUEST OF THE ARTIST.

IF YOU HAVE ANY ADDITIONAL INFORMATION, BOOTLEGS, STORIES, OR RELEASES OF THIS BAND PLEASE SHARE. FEEL FREE TO POST A LINK TO YOUR OWN BLOG IF IT RELATES TO THE ARTISTS IN THIS POST.
Posted by ConformReach at 8:08 AM